This and that–a bit boring really! 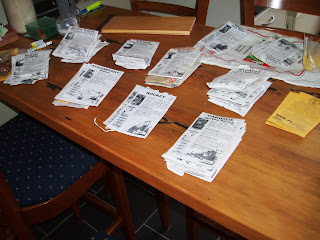 It must be spring as I had a bit of a tidy-up of the seed packets! There seems to be quite a few so I tried to sort them seasonally. But then I kept forgetting which pile was which and would have to stop and recheck every couple of minutes. Obviously tidiness and logicality are not my dominant features. But, I have been able to plant some seeds and some are even poking up and waving at me! How cool is that? It was only today that I noticed that the tank that holds my garlic (which finally has some scapes) has scarlet runner leaves poking through.Leftovers from last year making their way upward. It’s brilliant as they should still give the garlic enough time to thicken up some more before I have to pull them to make way for the beans.

I was going to get out in the garden today but the pouring rain deflated my enthusiasm. So I made some sourdough bread instead. I prepared it last night, as an afterthought, and put it in the fridge overnight. This morning I brought it back into the kitchen, plopped it into my proofing baskets and then later onto my pizza stone to bake. All done before 10.30am this morning. The round(ish) one is multigrain and the longer one is white with sunflower seeds. I have to watch M, as he loves warm, fresh bread, and quite often if I’m outside and I’ve left the bread cooling I’ll come into crusts missing from BOTH ends of the bread! 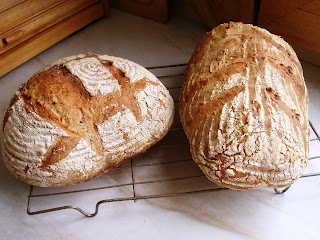 And then I had to vacuum the floor! I seem to make such a mess when I bake. Once the bread was finished I made a batch of oats and apricot slice. But this time I had mixed dried fruit from Angus Park which includes apples, pears, apricots, peaches and sultanas. I had to have a taste test and mmmmmm. But I forgot to take a photo before I cut it all up and put them in the tin, sorry.

Otherwise I’ve not much else to report. I visited the Cygnet market last Sunday and caught up with Kate (Vegetable Vagabond) and her handsome son who is on a visit. Then we popped in to see another friend who lives there too and checked out her garden. She puts me to shame. She’s a single mum with two kids and the fruit trees and vegetables she has growing are amazing. It’s a huge garden too, so much to try and keep under control. But at this time of the year that’s going to be impossible. The grass and weeds are growing overnight down here with the mix of rain and sunshine! I might have to toddle over with my trusty brush cutter as she can’t use one due to her carpal tunnel problem.

My rooster, Ron, is on his final warning. He has started to “have a go” at me. I’ve warned him that he’s not my favourite feathered friend, the way he “rapes” the girls and then struts about. And the noise he makes! So far he’s charged my legs and attacked my feet and hasn’t hurt. But the length of his spurs does cause some concern. So if he has another go he’s gone! 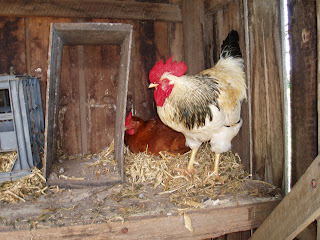 This picture is about 12 months old so his spurs are thicker and longer now, ouch! I’ll ask my farmer friend who gave me Ron if he wants him first. (he probably won’t – he has a few already). Then I’ll put a notice up on the noticeboard in the shopping centre. But if nobody wants him, it could be the pot!

Anyway, the sun is meant to come out for the weekend so I’ll be able to get out there. Whatever you have planned for the next couple of days I hope you enjoy it!

But it’s not even that. Tuesday was sniffing, sneezing and feeling like s**t.

Wednesday and Thursday – not a sniffle nor a nose blow.

Could it be hay fever? I’ve never had that, in all my life.

This is why M was up in Burnie. This greenhouse was pre-cut in Southern Tasmania, transported by trailer to Northern Tasmania and erected in the farmer’s field in one and a half days.