Yes, without trying to sound smug, I am off on holiday tomorrow.
We have had the mildest winter so far here in Tassie, with very little rain but I still think that I'm going to enjoy the next two weeks overseas!
So, I'll try and remember the camera and take photo's but I'm not really very good at that so don't count on it.
Best wishes to all and I'll see you in two weeks.
Jan
Posted by JOC at 5:35 PM No comments: 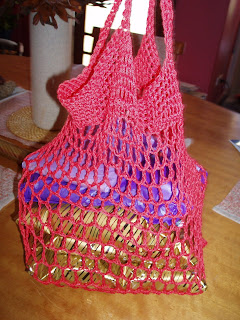 Yes, I made the bag to fill with a few different packages. Because of the courtesy of "The Adventures of Cassie" blog in sharing this pattern, I was able to crochet this bag in less than a week. Proficient crocheters' (is that a real word?) would be able to do it a lot quicker I'm sure. After all, I did undo it at the start a number of times. I wasn't sure that I was using the right cotton and the handles didn't seem wide enough so I added another couple of rounds there too.
I decided to wrap all the little packages separately so there were four packets of different tomato seeds; a black knit top that I had bought last year and never wore because it was too tight; a packet of figs; mixed fruit and nuts; peanuts and finally a bag of Brazil nuts. I went along the fruit and nut way because my friend likes to nibble on them during the day as it helps with her thyroid.
I also made a chocolate cake for her, thanks to "Providence Acres", and warned her husband that it was for her birthday! He has a very sweet tooth.
As you can see below, cake decoration isn't exactly my finest skill but it did taste pretty good! 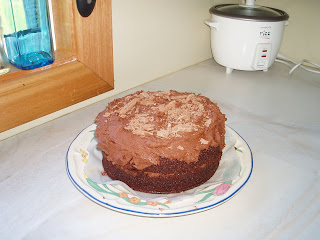 Now if only I could work out how to move pictures around the blog!
Apologies for such a scrappy looking post.......
Jan 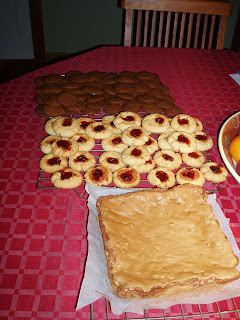 For instance, this week a dear friend had a birthday and I decided that instead of the two hours round trip to Hobart, wandering around shops wondering what to buy and hoping that whatever it was is appropriate, that I would make her a little goodie basket.

Luckily the local grocer had three small baskets for sale for $12. Two have already been used for birthday gifts, so I consider them a good buy. With my friend's basket I put in a small pot of home-made plum jam; gingernuts; jam drops; butterscotch brownies and from the garden some lemons, limes and kafir lime leaves. The biscuits were wrapped in a beautiful deep purple tissue paper and the basket did look rather pretty. Now ask me who forgot to take a photo of the basket!
Anyway, at my friends small party the other night I presented her with the basket and hoped that everything would taste good. She was very thrilled and before the night had ended the brownies had been opened and sampled by quite a few of the crowd. Nobody died of food poisoning and I did receive a number of compliments too!
I then received a phone call from my friend who said that she was at work enjoying a brownie as she spoke. She thanked me profusely for the gift and said that she really appreciated all the time and effort I had put into it. That made me feel pretty good too!

But getting back to the title, I love Blogland. Why? Because all of the recipes were from blog sites that I read regularly; -
Jam Drops from Down to Earth, thanks Rhonda
Gingernuts and Butterscotch Brownies, from Fig Jam & Lime Cordial, thanks Celia
and even the plum jam was a recipe online.
I've also made a crocheted hat as mentioned in a previous post; knitted dishcloths; Orange Cake; Date Loaf; Tomato Relish; Impossible Quiche; Pasta Sauce; Ruby Grapefruit Marmalade and a host of other recipes from other sites, too numerous to mention. This includes sites that have informed me on gardening, chooks; canine ligament injuries and holidays in Bali to boot!
Not to forget Gavin from the Greening of fame, for his cheese making lessons and information on everything sustainable!

So, please, please keep on blogging. I've only been here blogging for 12 months and already I've learned so much........

Oh no, not chooks again 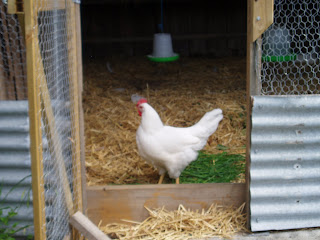 Eddie, see left, only took June off from laying.
There was a white egg in the nest today.
Perhaps Ron the Rooster has something to do with it........
Jan
Posted by JOC at 6:45 PM No comments: 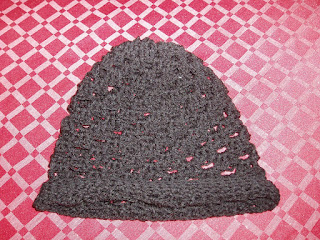 It's my first ever crocheted hat - not a tea cosy! And it fits me. I'm not being funny when I say that I have a large head with lots of hair too. So hats have never been my thing because it's very rare that I can find one that fits comfortably and doesn't look like a pimple perched on top.

Isn't it amazing what one can accomplish when there are no distractions - like men wanting dinner or lunch etc. I've had the house to myself really since Friday night so in the evenings I have been able to sit and work my way through this pattern, and it worked! I did have to undo and start again a few times - well about five times. But I hadn't gone too far into it for that to bother me too much. At this point I must thank "Slow Living Essentials" blog for steering me to a really easy pattern to start with and which will now encourage me to try more. So thank you Christine.
But will this mean that all family and friends will get "Beanies" for Christmas? At the hottest part of the year?.........
Jan
Posted by JOC at 2:36 PM 2 comments:

Email ThisBlogThis!Share to TwitterShare to FacebookShare to Pinterest
Labels: home made stuff 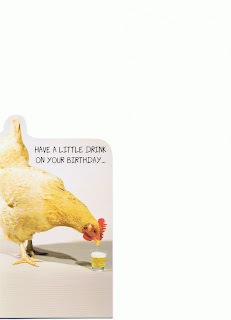 It's not my birthday today - it was a month ago. But when your friends start buying cards and gifts with a chook theme it does make me wonder.
Do I talk about them that much? Is it the fact that I do blog about them fairly consistently?
Or the fact that I have actually taken photographs of the eggs produced?
Yes, they all have names but then they all have their own personalities. Surely other people have names for their chooks?
Maybe it's a polite way for my friends to tell me that perhaps I'm going a little overboard and therapy might be the answer?
Nahhhh
There's nothing wrong with me - much.......
Jan
Posted by JOC at 2:26 PM 2 comments: 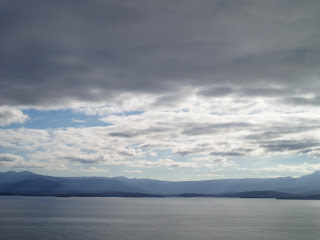 After another week of men clambering all over the roof, dropping screws and operating very LOUD machinery, they've all gone off on boats to Bruny Island.
The scallop season starts today in the D'Entracasteaux Channel which is the stretch of water between the town where we live in far south Tasmania and Bruny Island. They were almost drooling when they left!
Mind you, after the fortnightly men's group, which was last night, it was a very late - and slow start to the day. I know that they remembered the beer and wine but I'm not sure if they have thought too much past the scallops for food. They're not coming home until tomorrow afternoon sooooo .........
I sent a green shopping bag with M with various items - e.g. lemons to go with the scallops; fresh baked bread; green tea bags for breakfast cuppas; hard boiled eggs; fresh fruit and a bag of frozen cherries; home made gingernut biscuits and his dental floss!
In the end they didn't get away until close to midday and I can only hope that M remembered his glasses so that he can read the paper whilst the others go diving.
Frankly, I think that they're all mad, the water temperature would be about 10 degrees - if they're lucky. But they all love scallops, fresh scallops straight from the sea and into mouth and belly. And we all know how much men love their bellies.
As for me, I had a lovely quiet afternoon, washing sheets and towels and chasing chooks around the garden away from my cabbages. The sun has been shining and most of the scaffolding has been taken away from the house so it's no longer quite the obstacle course, and it's quiet. Mind you, Ron the rooster and Eddie the matriarch white leghorn will miss the scaffolding. They have taken great delight in perching as high as they dare this past week!
But, it's still not finished. Most of the roof and gutters are up but we still have the drain pipes to connect to said gutters. And did I mention that the solar panel men came last Monday and installed 11 pv panels? But they also have to come back again this Monday to finish it all off. More men and noise. But boy, will it be fantastic when it's all done!
The osso bucco that I prepared this afternoon will taste absolutely beautiful tomorrow night for dinner (I know this because I've already had a taste - just a little one) so hopefully tomorrow I will sleep in a little later than usual, have a leisurely breakfast and weather permitting get out into the garden!
That's my plan, what about yours?
Jan
Posted by JOC at 4:39 PM 1 comment: