The Beginning - and an end.

This is the beginning of my new grow house. M is constructing it with guidance from Joe. As you can see, we use old water tanks that M has cut in half as my raised beds.The two in the front of the photo hold potatoes and New Zealand yams (old men’s toes) and the one on the right has tomatoes, cauliflower and one, yes one, zucchini.I’m happy to say that most of the vegetables growing at the moment have flowers coming.

Inside the grow house are another three water tank raised beds and then down one side, on the North, I have an ordinary garden bed prepared for corn, rock melon and beans etc. On the other side of the grow house are a couple of smaller tanks and one of those will become my dedicated strawberry tank. I’m not sure yet about the other, maybe blueberries.

I have more tomato seedlings growing happily in the cold frame and two or three eggplants. I’m hoping for more if my seeds come through. I’ve already planted three apple cucumber plants in one of the tanks that will be in the grow house and I’ve also raised a couple of cold weather rock melon which are waiting for the construction to finish.

On the other side of the garden are more tomatoes; that dehydrator of mine is going to be busy this year – I hope. There’s also broccoli, lettuce, beetroot, rainbow chard (finishing), broad beans (finishing), peas, snow peas, sugarsnaps, and lots of garlic. I’ve planted some scarlet runner beans against the old grape vine with another zucchini but that one will be for the “girls”. I’ve covered it with some mesh at the moment but will remove the mesh when it’s a bit larger and more established.

The herbs are also doing well except my coriander has already run to seed. I’m going to plant some more and put them on the shady side of the house I think. I use so much coriander I can never have too much. I’m feeling optimistic about everything growing this year, we’re going to have so many plums and apples and even the young nectarine and peach trees have fruit coming. So I anticipate being very busy in the kitchen later this year.

And now onto the end – the end of the life of one of my favourite people here where I live. Peggy was in my book group for a few years and she told the most wonderful stories. She was 87 years old when she died last week and was born in Canada in 1923, moved with her husband and family to a farm in New Zealand in the ‘70’s, I think, and then to our town just seven years ago. You can imagine the stories that she told of raising four children on one wage throughout some tough years. The stories of saving up to buy a chair from the local second-hand shop and walking through the deep snow to get the children to school.

I was at her house yesterday with most of her family and friends to celebrate her life. Peggy was a quiet activist, achiever, book lover and according to her kids “The best Mom in the world”. Yesterday I learned that she had been a cheer leader at school, had met her husband at a local dance and chosen him because he had the best moustache in town and had taken all her kids on the anti Vietnam war rallies. The children, who are now in their forties and fifties, all said that Peggy had made being a mother her career. She knew it was important to instil good morals and ethics and to promote respect. Being a mother she taught her daughters and one son how to be good parents – and they love her for it.

Peggy died quickly and with the names of her children on her lips as she drifted away. She never wanted a big fuss, she was a mother to the end.

RIP Peggy, I’ll miss you and your stories so much.

Well, the deed is done. Lulu is ensconced in the small chook/rabbit pen with her nine – yes nine eggs. So far she is not happy and is busy eating, drinking and pacing about. There are six white eggs and three brown and I hope that in a little while she will settle down and sit.

The pen looks very nice at the moment and a good size but I still feel like the commandant of a prison. Thelma has been excluded and Eddie has decided that she will start her bullying again. I just hope that Ron pulls her back into line – soon!

I haven’t taken any photo’s yet. I will when things settle down. Everyone is all fluffed up and cackling at the moment so I’m leaving them alone. We made sure that Ron and Eddie were outside when we did the big move, but there was still a lot of noise and they came running to see what was going on. They seem as upset that they can’t get in as she is because she can’t get out. Mind you, Lulu has a few treats in there with her and she is enjoying the food, wheat, apples, cabbage and water. Perhaps they’re just jealous even though they have exactly the same on the outside!

I’ll let you know if she settles or whether the whole exercise has been a disaster and the end of the nine chickens. 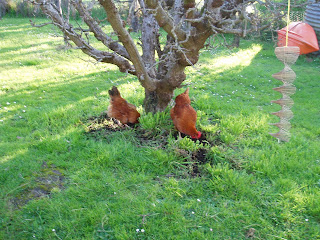 So, Louise (Lulu) has decided to become a mother. I just hope her mood improves once the eggs crack open! Naturally she has chosen the favourite nest to sit on and Eddie and Thelma will NOT use the other nest thank you very much! So from time to time I go up and see if I can get to the daily eggs before Louise. Nuh. She must have close to ten under her now, if not more. I haven’t been able to collect any eggs since last Thursday 11th November.

Thelma is pretending to be broody and goes and sits with Louise – for hours. But when I turn up with little goodies for them she soon jumps down. I don’t think that Louise actually wants her up there but as it’s rather a confined space, can’t do much about it!

But I have a plan. I’m waiting for a small hutch to arrive. It has two separate compartments which can be made into one, a top that comes off and a side door that opens. So once it’s here and I’ve put it together with the help of my trusty screwdriver, M will be called into action. I will put the hutch into the chook shed, fill the bottom with straw and then let the others out of the chook shed so that there’s just Louise and us pesky humans. This is part of the safety plan as I don’t know how Ron the rooster will react when he hears Louise going crazy and they can do nasty things with their spurs.

Then, using a towel to keep her wings from flapping about and getting her really upset, I will pick her up and M will transfer the eggs to the nest prepared in the hutch. I will then put her back onto the eggs (after counting them) and in the other compartment put some food and water and then open the door so that she can get to them.

Now, that’s the plan. Will it work? I’ll let you know, but I’m sure that everyone in the neighbourhood will know what’s happening. Louise is really, really grumpy. She even pecked me when I was holding some wheat out to her! So there’s bound to be quite a racket.

Once the eggs have hatched, Louise and her babies can stay in the hutch in the chook shed and have quality time without the others being able to bully them.

The tricky part will be sexing them as I certainly don’t want any more roosters! I was going to Google the subject but became worried about what might turn up if I typed in chicken sexing! My friend suggested using the word gender instead but then I worried that I might get some very unusual trannie web sites! I think, this time, I’ll go back to the written word.

So in 21 days (less now) I could become a grandmother – again.

Would I lie to you?

This dog is a thief! Here he looks innocent and honest but I know better. His crime had a devastating effect on his digestive system and the evidence was left lying in the garden for all to see.

I came home from work this week and thought that I would see if any of the broad beans were ready for eating. Upon viewing the vegetable garden I wondered at the fact that there were quite a few long stems of beans lying flat. It hadn’t been overly windy that day and it was dry. What had happened? Then I saw that there were no beans on any of the stems that were on the ground. No beans?

I puzzled for a while, picked some beans and went inside to prepare them for dinner. The chooks were happy to receive the empty pods and I thought no more about it – until M asked if I had fed Terry some broad beans. A lot of broad beans.

“Well” said M, “there are a number of piles of dog vomit around the yard and it’s all broad beans!”  (apologies to the faint and/or those with vivid imaginations).

Sure enough, there was the evidence that somebody had decided to have a little smorgasbord prior to my return. And he must be feeling rather poorly as he hadn’t performed the other disgusting dog habit of cleaning up after himself!

I decided to see if he would take the broad beans if I offered him some. No, oh really, gone off them now?

I think the beans will be safe from now on ……

The photo above was taken one week after M decided to cover the stump with sawdust and light it. It has considerably reduced in size but it is still burning. Our neighbours must be absolutely fed up with the smoke but we’ve had no complaints so far.

With all the machinery that was used to drag the cut branches out of the way we now have no grass on the block. So M has sown grass seed as he doesn’t want a dust bowl in summer. But this means that the chooks are confined to barracks! And they’re not happy!

The building that can be seen in the second picture is the back of the local police station. We had to take some of the fence down to bring the final large piece of tree down. M will have to replace it soon as the local “copper” usually has sheep in his back yard to keep the grass down!

We are now ready to construct a grow house – well I am anyway. M seems to be dragging his heels a bit so I have to keep mumbling “eggplants, eggplants” in the hope that his desire to have a constant supply will motivate him!